"You learn how to do things by screwing up—so don't be afraid. If you've got something you want to make and you don't really know what you're doing, just do it; you learn by making mistakes."

One of the first things encountered in walking through the Exploratorium was this reindeer bicycle: 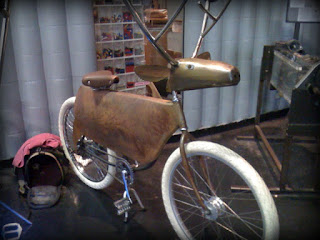 The same artist, Jay Broemmel, had also made the Golden Gate 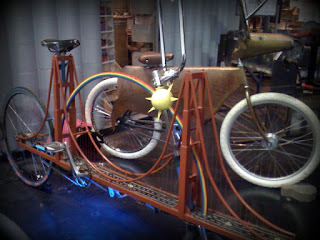 —and a red fiberglass dragon with rotating light-up eyes. 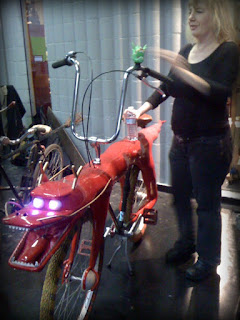 You can see more of Jay's bike creations at the Meet the Makers talk webcast here. Other speakers included Tim Hunkin, David Cole, and experienced Young Makers Sam and Alex. All of these speakers are hard to define in a phrase, as they are each and every one people of diverse interests and abilities.
The theme of how everyone began to make things was particularly strong this month, as Jay showed his childhood model of an Imperial Walker from Star Wars and Tim demonstrated Gladys, the Burglar Catcher, a robot he made at age 11 (the first machine shown in the video link). Sam and Alex showed a number of their previous projects, which they expressly chose with the aim of learning a new skill each year.
A few common themes have evolved from all the speakers over the last three months: Just start, even if you're not sure what you're doing. Expect to make mistakes and learn from them. And have fun. Good advice for almost any endeavor, really.
Back at the plussing session, projects were in various stages:
Tony emphasized that projects should be more or less display-ready at next month's Open Make. He talked about the lull that one experiences after the initial excitement of starting something new. Tony's advice? Expect it, and keep going. Tell yourself you'll only work for 10 minutes—that 10 minutes may turn into an hour before you know it. Michelle also emphasized that a project can be modified or scaled down if it helps you to finish it.
Posted by Yolo Makers Group at 6:51 PM